What ho, a quest? It's a Stardock D&D Night!

I have long known that I work with plenty of people who love games - that's not news to me, and if you've been reading these blogs at all, it isn't to you either! What did surprise me, however, was just how many of my colleagues actually love Dungeons & Dragons and other table-top RPGs.

About two months ago, we were coming off the high of having a fantastic in-person game night. Raeann - a member of our amazing operations team - said in one of our chats "Stardock D&D night, when?", two of us game masters (GMs) raised our hands, and the rest is history.

What commenced after that conversation was about 6 weeks of careful planning and plotting. We could have just grabbed any old module and run it, but we had grander ideas in mind. I pitched the idea of running a Stardock-inspired adventure, Jacob (the other GM) suggested we run two tables and play with some cross-table meta stuff, and we went running from there.

The three of us met frequently to design the adventure, which is called a "one-shot." This means that the entire thing, start to finish, should be contained within a single night of play. We had 12 of our awesome coworkers sign up and split them into two teams of six. Since we had a mixture of experienced players and people who were brand new, we hosted a character creation night at the office to get everyone prepared! 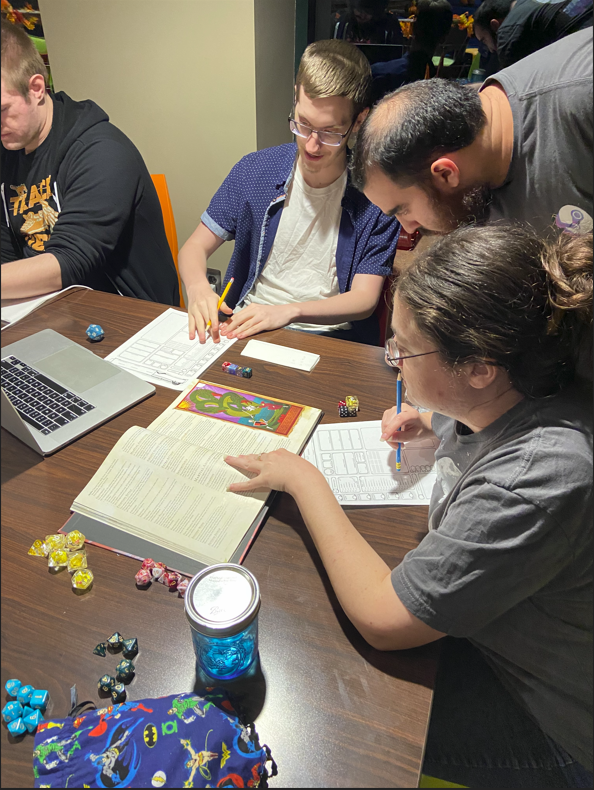 Each encounter and aspect of the adventure was designed to be evocative of life and culture at Stardock in some way. The brave adventuring parties were sent to investigate some strange going-ons at an ancient temple. When they arrived, they discovered that the temple was devoted to a six-headed dog god that we called Astracanum ("Star Dog" in Latin). We have an amazing dog-friendly culture here and we know our players were delighted to see some of their beloved dogs referenced in the game.

The mid-boss fight was actually designed after the little Roomba that vacuums the carpet downstairs in the "pit" - which is the nickname we have for where most of our developers sit. It is affectionately called "Doomba" and is known for causing minor inconveniences like running into people's desks or pulling their headphones out of their PCs.

The players also had the pleasure (some of them would tell you misfortune) of interacting with Yargen the Goblin, an NPC that, I will admit, Jacob and I didn't really want to include at first. In the end, Raeann's insistence that he be added won out and Jacob and I had to admit that we were wrong to have ever been in doubt. The interactions our players shared with him were hilarious and only added to the greatness of the game.

The final fight was against Ceresa, the Fallen Enchantress - who, lo and behold, was twisting and shifting the dimensions between worlds and trying to merge one world into another in order to invade it with undead armies. If you've been playing our games for a while then you'll know exactly who she is and why this was an exciting surprise to everyone at the table.

Because I can't help myself, I wanted to make props for this adventure - and thankfully, Raeann and Jacob were both on board for doing so! I think the potions that Raeann and I made turned out perfectly. We filled them with Gatorade and luster dust, which meant they were 100% edible and that our players could drink them when they used them - which they did! 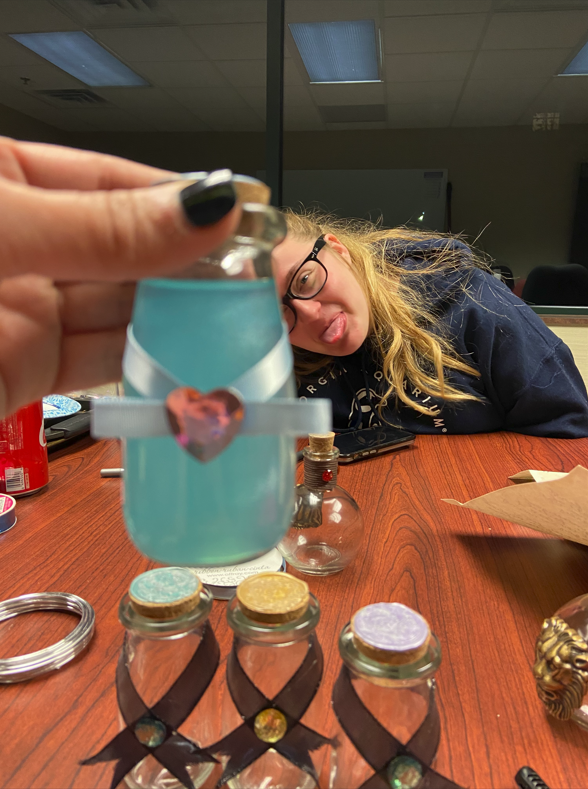 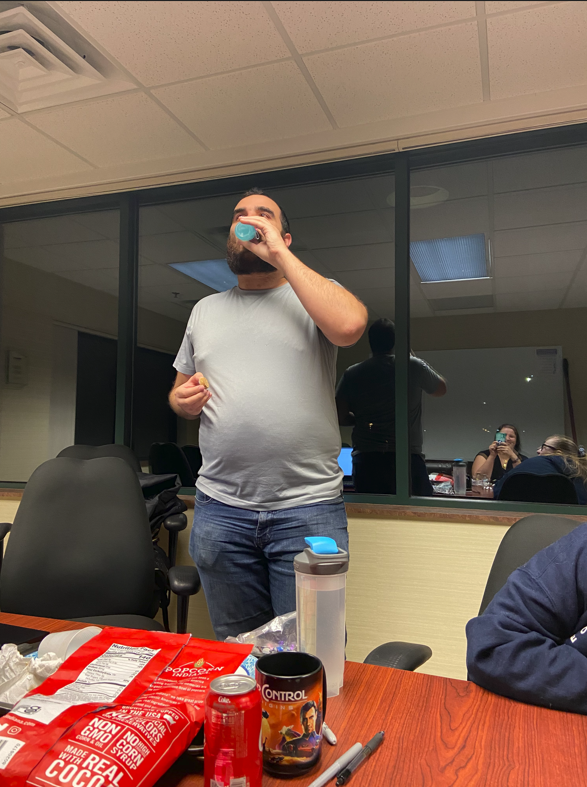 We had so much fun crafting together - and Jacob even took the first test drink of our concoction. Success! Our players were beyond delighted when these hit the table.

The adventure was designed to run simultaneously so that both groups would unknowingly interact with each other to solve some certain puzzles. Eventually, they figured out that the mysterious "person" they were communicating with via the magical tablet was the other party, and there were definitely some antics that ensued after this discovery. Their actions at each table even affected the final boss - we had designed her with a dimensional rift ability that allowed us to zap players to the other table for the duration of the fight. 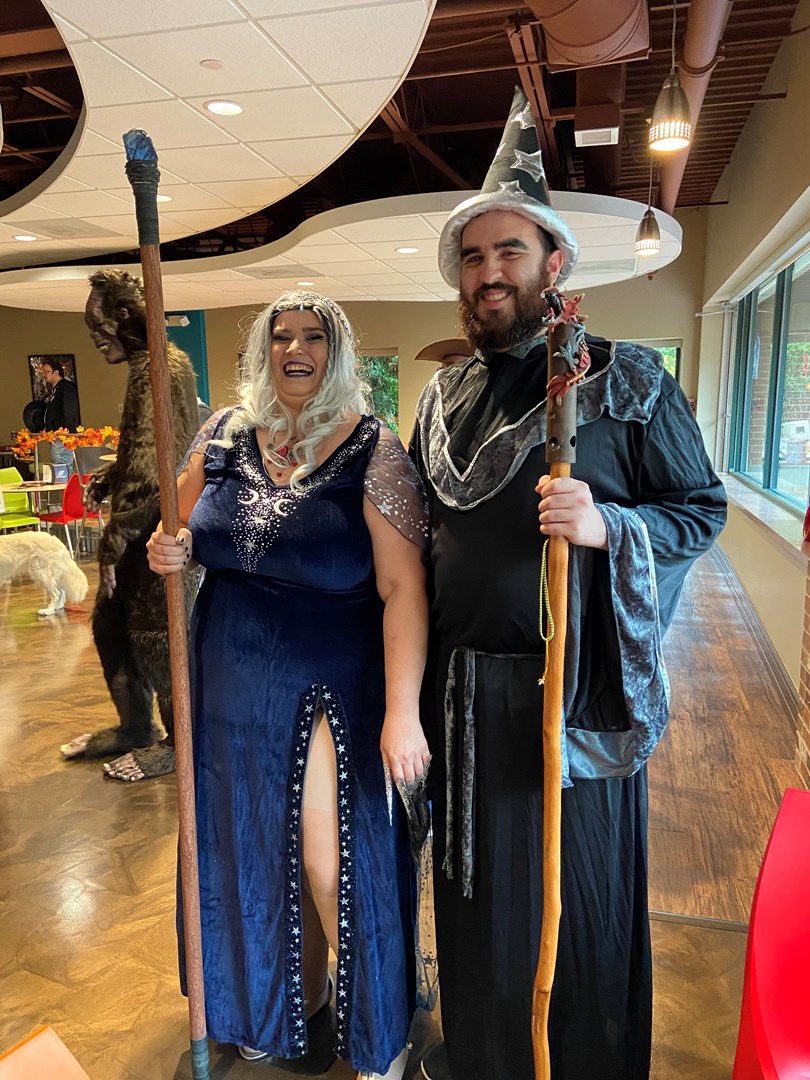 One of the benefits of running the game on the day of our Halloween party was that the game masters sort of got (and stayed!) in character. After about 13 hours in that wig, though, I was more than ready to rip it off when I got home! The game ended at midnight and I didn't get home until probably close to 2:00AM, but it was absolutely worth it.

In all, everything went off with barely a hitch. Our coworkers had a blast and the three of us are immensely proud of ourselves. We are definitely going to do some more D&D in the future - just probably not quite as elaborate as this.

Are you a table-top role player? If you have any fun stories to share, I'd love to hear them!